With the news that the North York Central branch of the Toronto Public Library was going to be under construction for most of 2017, Kya Publishing embraced the opportunity to continue to feature their event in the heart of North York, adjacent to the Library in the beautiful Toronto Centre for the Arts. A generous sponsorship through North York Arts provided the spacious atrium/hall area for participating vendors of the Toronto Urban Book Expo to set up tables, present their books, and communicate with one another.

The sub-zero temperatures of the February weekend when the 2016 event was held was re-evaluated, when Kya Publishing organizers noted that most of the visiting American authors would not get to fully enjoy and appreciate the beauty and vibrancy of Toronto at that time of year. For many, it was their first trip to Canada, and Toronto specifically, and it seemed unfair to have them remain in hotel rooms and malls to escape the cold. An August event date was determined, and the holiday weekend of the annual Toronto Caribbean Carnival was selected as a suitable time to schedule the Book Expo. 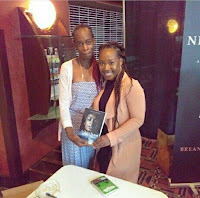 Much like the excitement, tourist-friendly events, escalated international profile, and increase in tourists that the previous years' NBA All-Star Weekend provided, the Carnival weekend also allowed for visiting authors to experience the best of Toronto's urban culture and entertainment, as well as bring additional people to the city of Toronto who could potentially attend TUBE.

The increase in travelling American authors could not be ignored by Kya Publishing's coordinators. The previous year had participation from American authors growing exponentially, and their presence was a benefit to writers and readers alike. Authors from the U.S. outnumbered Canadian authors for the 2017 event, and the reach was expanding.

While the previous year brought mainly travelling authors from urban centres close to the border like Ohio, Michigan, and New York, the 2017 installment had writers flying in now from the south, like Florida, and Texas. There were many familiar faces, as about half of the attendees had participated in the 2016 far...but there were also many new faces. A joy for authors to network, exchange contact information, and build on the already established urban writing network. 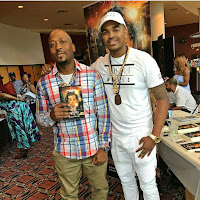 Again, DJ Majesty was present to provide the urban musical soundtrack to the afternoon's event. Held on Sunday, August 6, it was a new day of the week, as well as the first time TUBE had been held without the co-sponsorship and additional communications support from the Toronto Public Library. Consistent was the partnership established with the Novotel North York Hotel, who had graciously provided discounted accommodations and other perks (free breakfast, parking) to Book Fair attendees. The familiar location made it a comfortable return for many American visitors, and a less-hectic alternative to the downtown hustle and bustle for the holiday weekend.

The staff of the Toronto Centre for the Arts, and the volunteers from North York Arts were amazing. On hand to help set up the event, and escort authors to their tables, while helping them unload from awaiting cars was a fabulous addition to the festivities, remarked upon favourably by all respondents to the follow-up survey.

The venue: stunning. High ceilings, detailed flooring, and the broad windows and designs that only a Centre for the Arts could bring made for an elegant setup, and spacious grounds to browse and chat about the range of books that were available for purchase. 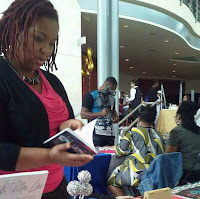 Attendees ranged from aspiring authors, community members, family and friends of the vendors, to arts professionals from the city. Traffic began slowly, increasing as the afternoon continued on, however, the notable lack of participants was evident, in comparison to past Expos being held within an open library.

Spirits were positive, nonetheless, as the authors and attendees shared projects and aspirations, and the city outside the doors of the TCA prepared for another day of carnival festivities.

A follow-up survey determined that the majority of authors preferred the switch from February to August, and recommended that the event remain during Carnival weekend so they could maximize their marketing potential, participate in surrounding events (which was a bonus to visiting authors), and also to be a part of the bigger cultural celebration...in their own way. They were pleased to announce suggestions and their hopes for the following year--they were invested in the process, and the Kya Publishing vision.

The afternoon affair was a great exercise in execution for the organizers of TUBE, who were increasingly gaining visibility in the Canadian book media, were expanding their advertising reach, and were also mastering the preparation and execution for the vendor services and volunteer roles, with each additional year.

Moving into the fifth year of TUBE, the overall impact that writers were hoping to have on the city, the response from book professionals and community members, and also the execution and management of the Expo were now reaching a place of comfort and experience. TUBE 2018 would be a new challenge, to take the lessons, feedback, and objective of the Book Expos of the past, and channel them into an improved version of the book fair, beneficial and productive for all involved, in all capacities.
Posted by Kya Publishing at 2:02 PM