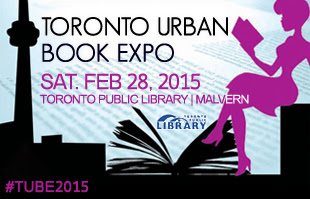 For year two of Kya Publishing's Toronto Urban Book Expo (TUBE), the group of writers expanded, and again gathered at the Malvern Branch of the Toronto Public Library. As a part of the Library's Black History Month celebration, the event took place on Saturday, February 28, 2015.

Participants and attendees both saw a nice increase, over the year. Many of the same Toronto-based authors returned to set up vendor tables in the auditorium, as well as friends and associates who had heard about the event over the months. The group of authors included:

Also participating were the Black Starline Readers book club, who were treated to a special Q&A session with urban fiction author Kamilah Haywood.

For this edition of TUBE, there were giveaways added: a gift card to Chapters, a Kobo e-reader, a few books, as well as donated Raptors swag. Included was Toronto's DJ Majesty to officially provide the urban musical soundtrack to the afternoon, as well as video coverage by OSC Photography. 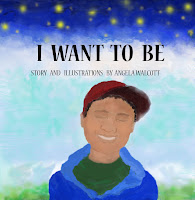 Word was spreading. Interest was gaining momentum, and there was a supportive crowd of approximately 150 throughout the afternoon, who came to visit with their friends, purchase reading materials, and learn about the various projects on display.

With the same concept, the conversation had now changed. What would the following year bring? Perhaps Kya Publishing could bring sponsors on board. Perhaps guest authors, and celebrity appearances? Authors and visitors alike were beginning to feel invested in the process, and were eager to share their feedback, opinions, and well wishes for the future of TUBE.

Unlike the previous year, this year there were no formal presentations or guest speakers. Instead, the music played and set the urban ambiance for the day, refreshments were served, and there was a relaxed atmosphere for conversation, socializing, and education about urban fiction.

The momentum was tangible, as well as the need for writers to gather in a culturally specific space to celebrate the inspiration for their words, as well as project their hopes for the future of their literary careers.

As a special treat, children's authors Angela Walcott and Simone DaCosta also featured book launches as a part of the festivities.

By now, most of the authors are acquainted with one another. Having connected on the literary circuit in town, the energy of support and mutual respect was evident. Everyone wanted to do well with their writing pursuits, and everyone wanted to ensure that the visibility of their efforts continued.

At this stage, there were advertising dollars invested, postings across the internet, and media interviews sought out to help spread the word. Kya Publishing's vision was becoming more defined, and the steady growth was evident.
Posted by Kya Publishing at 4:39 PM