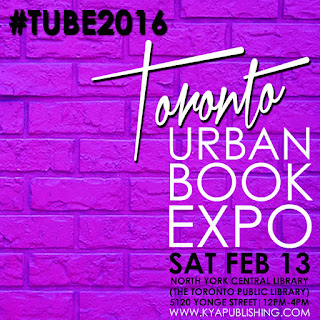 There was a unique energy to the third installment of the Toronto Urban Book Expo (TUBE), held on Saturday, February 13, 2016 at the North York Central (NYCL) branch of the Toronto Public Library. Having outgrown the capacity available in the Malvern Branch auditorium over the previous two years, the NYCL provided a new auditorium space, breakaway rooms for additional programming, and an increase in awareness for new library patrons and community folk.

An added incentive for authors from out of town, who had expressed interest in participating in the event in response to online marketing: the NBA All-Star Game was to take place in Toronto the same weekend. The focus on urban fiction and culture of TUBE resonated specifically with African-American authors, Caribbean-based authors, and urban fiction writers across the continent. Many reached out to Kya Publishing following the 2015 event, with hopes of expanding their readership across the border and gaining international supporters.

Registration was overwhelming both from urban writers, and urban cultural organizations, independent business owners, and small publishers. In total, 50 vendors were participating in an awesome display of community creativity and support.

The added incentive of the festivities of the All-Star weekend brought an added energy to the travelers. There were many noted urban celebrities in town, a plethora of special events, and an overall feeling that Toronto was the "place to be" for urban entertainment aficionados. DJ Majesty provided a free special urban mix CD for all attendees, and there were giveaways again from Kya Publishing's favourite brands: The Toronto Raptors, Chapters, and Kobo.

The energy was fantastic, with attendees reaching approximately 350 throughout the afternoon. Conversation, promotional opportunities, and community exposure felt incredibly positive for participants and visitors alike. There was an auditorium hosting the majority of the vendors and authors, the main hallway was where the businesses and reception desk were staged; one breakout room hosted children's authors with live readings, crafts, and treats, while the second breakout room was designated for presentations and readings from participating authors.


For photos from the 2016, and contact information for the participating vendors/authors, please visit the Kya Publishing Facebook Page.

Posted by Kya Publishing at 8:14 AM