JCUF VOL 5 NO 1 (2018) - I WISH I NEVER MET HIM: Courting, Relationships, and Commitment for Black Women in Toronto 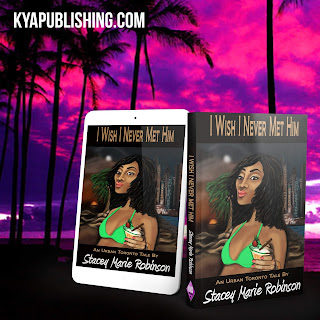 I WISH I NEVER MET HIM (2011) - It's important to pass on historical moments to the younger generations--this is an obvious fact. Stories of politics, technology, social systems, and traditions are easily discovered in textbooks and documentaries, and we're able to understand previous generations through these documented facts and events.

Matters of the heart are individual, however, no less important. Relationships and navigating dating rituals are also entities that change with generations and within cultures. What might have been acceptable courting practices in the 60s in Jamaica, for example, may not be reasonable in Toronto in the 90s. Popular dating habits in Chicago in the 80s are definitely going to be different than dating in Ajax in the early 2000s.

In this particular novel, I chose to explore relationships through a local cultural lens: dating in urban Toronto from the 90s until the early 2000s, and what that might commonly look like. Using the main protagonist as the constant, she reflects on her past dating experiences from her first encounter up until what may be her final commitment.

Stories of inter-personal relationships are important, especially when communicating lessons of cultural values and standards to the next generation. I wanted to capture the anecdotes, and the common occurrences, the choices presented at various stages of dating, as well as the consequences of situations. Heterosexual relationships were explored through the main character Renee, as well as homosexual relationships with Renee's best friend and first cousin, Vanessa, in her love life.

THE GENERAL THEME OF "I WISH I NEVER MET HIM": A young woman chronicling relationship advice and personal experiences through journaling.

THE SOCIAL THEME OF "I WISH I NEVER MET HIM": A cultural look at dating in urban Toronto, from a Black female perspective.

Toronto is home to the largest group of Canadian-born and Caribbean-born Blacks in Canada, yet ethnic diversity in literature hasn't adequately focused on the African-Canadian or African-Caribbean experience, according to Amoaba Gooden, in "Community Organizing by African Caribbean People in Toronto, Ontario." In this Journal of Black Studies article, published in 2008 in the third edition of Volume 38, Gooden outlines the social groups constructed over the years to provide social comfort, activities, and camaraderie. From the Canadian Negro Woman's Association of 1967, to the student groups at York University, University of Toronto, and Ryerson in the late 60s and 70s, community organizations have historically been a common method of uniting, building relationships, and sharing experiences.

These social clubs and self-help organizations often struggled to maintain a long-term presence, however they have remained a vital part of publicly uniting on a social commonality. One of the most public of these organizations was the Caribbean Cultural Committee, the founders of the parade formerly known as "Caribana." Despite the need for Black groups to gather to foster cultural community in Canada, Gooden notes that literature tends to focus on the experiences of other ethnic communities like the Italians, Greeks, and Chinese. While their journeys are well documented as Canadian immigrants, there still remains untold stories of the day-to-day activities of Black Torontonians, and a thorough documentation of their social progress over the years.

The representation is scarce, and Andrea Davis believes this is because "Blackness" has no national relevance in Canada. In her article "We have historically been Rooted in/routed to this place, and we are here to stay: women's voices in Black Canadian literature" (New Dawn, 2006), she indicates that this is why there is difficulty and slowness in articulating a Black Canadian literature.

As with most issues of "Blackness" in Canada, we look to our American neighbours for examples and research. In the U.S., their literature is also used to represent their position. The ownership of this position, Davis indicates, "demands the negotiation of an intensively conflictural relationship between African-diasporic writers and the region or nation(s) they claim to represent." The conflict exists because while the literature is forced to represent the national Black consciousness, it is also required to critique it.

"The works of Black women writers in Canada offer us, perhaps, the most critical tools in the reconceptualization of what constitutes a Black Canadian literature, and in the articulation of (an)other kind of Canadianness that can account for both multiple Black and multiple Canadian identities," according to Davis.

She believes that most of the Black women writing in Canada represent multiple diasporic identities, and must understand that their work is part of a shared literary tradition. She says: "In Canada, where many Black women writers are of Caribbean or African descent twice or three times diasporized--the acts of boundary crossing are multiple and necessary, transgressing not just geography, but also nationality, ethnicity, genre, race, and sexuality."

Issues of geography, nationality, ethnicity, gender, and race are easily quantified and studied. These are usually characteristics that can be understood and analyzed. When it comes to exploring sexuality and interpersonal relationships, however, from a Black female lens, this of course will be more subjective. That being said: Where can women go to hear their voices in this regard?" How can the Black women who reside in Canada, and want to explore their sexuality in the context of their history and surroundings, do so formally, much like other cultures can by accessing tools and narratives?

"I Wish I Never Met Him" is an attempt at rooting the Black Canadian female, in a Toronto-specific context, in a few difference spaces and times. Rather than having to explain, or compare and contrast the Black courting experience, this story is a look at one particular woman's fictional journey and what that looks like in the context of her location, ethnicity, and other defining characteristics.

At the root of this story: a Black woman falling in love, and figuring out what love means to her. I hope that the scenarios are familiar for those who have walked similar paths, and are currently navigating similar thoughts as a part of life in Toronto. From being courted at the Eaton Centre as a young teenager, to meeting potential mates at various events in the city. It is my hope that the language, the processes, the conversations, the dating activities, and even the mentalities are familiar, and that Black females (or other readers) can recognize and appreciate the authentic experience fictionalized in the text, as well as use the circumstances to help navigate future experiences.

By documenting the otherwise mundane, this book is meant to chronicle the courting activities and make it a part of a common social history for Black Canadians, and their experiences during this particular generation. I imagine that the experiences configured through stories, observation, and speculation may differ quite a bit with the advent of various technologies and levels of communication and connectivity, in the Black culture and global culture. But during the span of Renee's specific Black female experience, this is how she dated, how she explored her sexuality, how she learned about her personal boundaries with men and relationships, and inevitably how she blossomed as a woman and found a way to understand love. Hopefully there is value in connecting these matters of the heart, through a familiar (or at least entertaining, and informative) fictional voice.