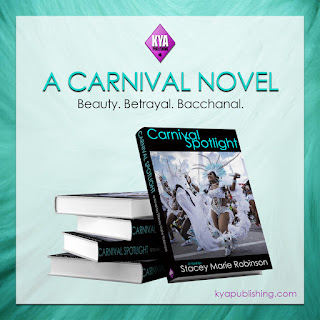 CARNIVAL SPOTLIGHT (2014) - I wrote this book as a follow up to "Video Light" and the lives of the main characters Delia and Ryan Wright. An admirer of Sister Souljah's writing, I truly appreciated how she would take various characters from her books, and develop them independently at another space in time. I loved the way that readers had the opportunity to follow up with characters later in life, and continue the fictional journey with them in another book. In writing "Carnival Spotlight" I wanted to explore Delia and Ryan's relationship and whether or not it was capable of evolving.

In 2014, I was also knee-deep in the production and administration of Toronto's Caribbean Carnival with one of the city's larger masquerade bands, and I would often observe the social aspects of mas making and marvel at how unique and niche the experience really was. Participating in Toronto Carnival as a spectator or reveller was one thing, but to live the daily behind-the-costumes routine at the mas camp and band level was an entirely different ordeal.

My understanding of the passion behind the Caribbean Carnival phenomenon was on high alert, and my curiousity for the implications of being so closely tied to this world was also elevated. I began to realize that my perceptions of the culture, the carnival itself, and its participants was in extreme contrast to the views and ideals of those who were only familiar with the carnival as yet another Toronto event. While I vehemently justified my use of time, finances, and creativity through mas...others questioned the relevance. I thought it would be the perfect opportunity to take Delia and Ryan, walk them into a mas band and see what happened.

Through the lens of an outsider--a Jamaican one, at that--I used this novel as a tool to explore how someone without any interaction with the inner-workings of mas would take on the experience. My protagonist, Delia Chinn aka Delia Wright (someone who was decidedly Jamaican-centric in her lifestyle and experience) was lured into the world of Trinidadian-focused music and culture.

THE GENERAL THEME OF "CARNIVAL SPOTLIGHT": An aging dancer regaining her self-esteem through music and culture.

I came across an article by Melanie U. Pooch, from the 2016 book "DiverCity--Global Cities as a Literary Phenomenon: Toronto, New York, and Los Angeles in a Globalizing Age" and her take on the Dionne Brand story: "Toronto, What We All Long For." As a global city, Toronto is so multicultural in nature, one would think that the social and cultural expectations between Caribbean-Canadians of Jamaican and Trinidadian backgrounds couldn't be that different.

Pooch's analysis called Toronto an immigrant city and a role model of social integration. It was the 1976 Immigration Act that served as the catalyst to bring families together again in a new land, boost the Canadian economy, and support the various diasporas as a result. In particular, looking at the Asian and Caribbean immigrants, the author noted that Toronto's cultural industry was key to the economic success of the city.

Brand's book was noted as a translation of Toronto that "negotiates between the different worlds within a society." Listing code-switching, counter-geographies, and the gaps between immigrant generations as issues brought up through Brand's fiction, I felt as though "What We All Long For" had a few similarities with my intentions when writing "Carnival Spotlight."

I, too, wanted to highlight the voice of the city's ethnic diversities, specifically between the various island communities. I also wanted to profile African-Canadian vernacular, and perform the "many lingos multi-ethnic Toronto performs." To tell a story of Toronto is to acknowledge that while we all share the city, that our ethnicities by nature make it a location that is filled with many, many sub-cultures, native values, and social objectives at times.

Melanie U. Pooch mentioned that Dionne Brand's novel was a "zone of contact" in which different languages, cultures, and ideologies intersected. With the immigrant children born in Toronto constantly "translating the city's culture to their parents," it seemed as though even within similar cultures, there were still additional levels of understanding and reality to explore.

While "Carnival Spotlight" specifically looks at the Caribbean Carnival experience from a Jamaican-Canadian lens, intersecting with a Trinidadian-Canadian focused environment, it does also touch briefly on the ways in which other nationalities also have found a space within the Caribbean celebration, by nature of just being a Torontonian. There is nothing spectacular about this, but the hyper-awareness of the character Ryan (who is also an historian) can't help but notice the ways in which his personal Jamaican upbringing is again in conflict with the Jamaican upbringing of his wife (central to the theme of "Video Light"), and the Caribbean-Canadian folks that she introduces into their lives through carnival.

A crucial voice in Black/Caribbean-Canadian literature, Brand's view of Toronto and "the experience of Blacks in Canada as oscillating between invisibility and hyper-visibility" is communicated in print in a way that one would almost have to experience first-hand to understand the subtleties and nuances.

While I respect the creativity and writing processes that allow for writers everywhere to transport and place themselves into spaces and races that are not natural to them, I also strongly believe that there is something to be said for writing specifically about an experience, a culture, and a phenomenon that is directly witnessed from one's own place within the culture. Brand's view of African-Canadian life is honest, because it is real. Not necessarily autobiographical, but still culturally authentic.

Spending years and countless hours engulfed in the Caribbean Carnival culture and related surroundings, I had to carefully compose this novel to ensure that I was being as objective as possible, while still being true to the experience, the joys, the passions, and the elements of the story that were not necessarily related to "carnival" per se, but just a result of human nature. I believe that it was my position within the carnival environment that allowed me to observe and understand particular occurrences, traditions, and activities. I also believe that it was my position as a Jamaican-Canadian with no familial ties to "carnival" that allowed me to witness the carnival culture also as an outsider, putting the pieces together and participating wholeheartedly as best as I could from my own limited viewpoint.

My conclusion: that carnival in Toronto is obviously a different phenomenon than Carnival in Trinidad, Carnival in Jamaica, or even Carnival in Ottawa, Ontario or Edmonton, Alberta. I recognize that living in Toronto puts us in a constant position of navigating various cultural lifestyles, traditions, and circumstances that I believe is a great skill that we can expertly transfer no matter where in the world we travel. A true Torontonian is comfortable around Asians, South Asians, Europeans, or those of African descent. It's just how we live, by default. We can recognize the dialects, distinguish between Indian curry and Jamaican curry, and we can often take for granted just how diverse our daily interactions are.

What does that say about Toronto's Carnival as it happens in this particular book? I let the various characters genuinely speak from their cultural experiences, and I believe the end result that Delia was true to her soul as a dancer, and Ryan was true to his as an academic. The other players in the novel were also true to their origins, their histories, and their positions within Toronto's Carnival hierarchy. As a mother. An expert. A superstar. A performer. All of the individuals in this fictional carnival environment navigated the social experience through their role, as well as their ethnicity. It is my hope that these characters authentically developed as a result of this particular summer in the city, and that readers can empathize with their positions, understanding the effect that this event has on a range of cultures, integrating with their lives from various points of contact within the city of Toronto.